We’ve Been Down this Hole Before

You can’t go to the midnight opening showing of Episode VIII without understanding the seven Star Wars movies that have come before it. Similarly, as amazing as the events of Parashat Mikketz are, you can’t truly appreciate them without understanding them in relation to Parashat Vayeshev.
In Parashat Vayeshev, Joseph’s brothers, out of jealousy and hatred towards him, throw him into a pit. They literally have a picnic as they debate what his destiny should be. The compromise is selling him into slavery, but his seemingly hopeless future begins in a pit. It is as literal as it is metaphoric. The Torah says:

The rabbis believed that no word in the Torah was superfluous. So then why the need to say both? If we know the pit was empty, then why also stipulate that there was no water in it? Rashi tries to clarify and says there were snakes and scorpions in the pit, which of course there’s no justification for, and makes no sense if the Torah already said the pit was empty. I believe that calling the pit empty was a reflection of how Joseph felt at that moment. He felt empty, alone, lost, and by himself, with no one and nothing to guide him. In Mesechet Taanit, the Talmud refers to Torah as water. Our commentators thus suggest that “there was no water in it” means that Joseph was in an empty pit, without Torah. He did not have the ethics and values to guide him and he did not know what to do next. He was stuck in a hole and there was nobody there to help him out.

Yet, after all of that, what happens in Parashat Mikketz is really miraculous. After being abandoned by his brothers, after being framed by Potiphar’s wife, after being forgotten in prison by those that he helped save, Joseph is called upon to interpret Pharaoh’s dreams. I believe what he does next is not just out of fear of Pharaoh or a sense of obligation to do what Pharaoh asks. Joseph doesn’t just interpret Pharaoh’s dreams. Joseph ends up saving an entire population from famine, from food insecurity. He was in that empty pit – literally – and lost – metaphorically – and he turns around and is able to save everyone. When Pharaoh, and all of Egypt, are lost and similarly in their own empty pit, Joseph knows that experience and is able to help them out.

This reminds me of one of my favorite quotes from one of my favorite shows, The West Wing, which I encourage binge watching on a regular basis. If you watch it enough, you might even forget for a moment about the current realities of our society and government. I’m not sure if this story originates from The West Wing, but even if not, it is retold in a way that only Aaron Sorkin is able to do. In season two, Josh Lyman, Deputy Chief of Staff, is dealing with PTSD, following being shot in an assassination attempt on the President at the end of season one. He is dealing with serious trauma in his life. Leo McGarry, the White House Chief of Staff, who is a recovering addict, and has his own share of dealing with personal trauma, shares this story with his colleague:

Joseph had been down that hole of hopelessness. When he sees Pharaoh and Egypt stuck in the same hole, he doesn’t take charge and action because he sees an opportunity for his dreams to be fulfilled, for him to rise in power and prominence. He does so because he was in that hole before, empty and devoid of the values to guide us on our path, and he knew what it felt like, so he jumped in to help Egypt out of that hole.

The essence of Chanukah, of placing the light of our chanukiyot in our windows, is a powerful message. We are actually 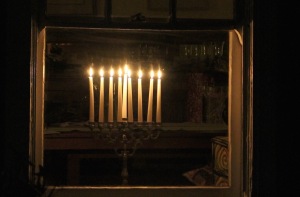 prohibited from using that light to benefit us. Shabbat candles had a practical purpose. You lit candles as it went dark, and you used that light to light up the room, the dinner table, etc. You can read by the candle light, and when the candles burn out, it is dark and time for bed. But the Talmud stipulates that you can’t use the light of the Chanukah candles for your own benefit. They are solely meant to go in our windows to follow the commandment of pirsum hanes, to publicize the miracle. But more so than that, we place the menorah in our windows to share our light with those who need it most. We light up the darkness that others are feeling. Because we have been there. We have been in that dark place before. That is why we are taught to increase the number of candles each night of Chanukah, to always add more light to the darkness. That is our challenge and that is our goal. That is what Joseph did. He was there. And so he knew what it felt like. And that is our goal too! We have been in this hole before. So when we experience someone else struggling with darkness, we put our menorahs in the window. We jump down the hole with them, because we know the way out.