As a Rabbi & Dad, This is What I Want My Kids to Take Away from Hillary Clinton

This article was originally published on August 3, 2016, on Kveller.com.

I rushed home from work early last Tuesday afternoon. The roll call was taking place at the Democratic National Convention and I wanted to sit on the couch with my children by my side to witness history. 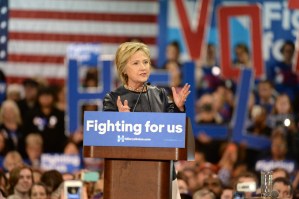 We cuddled up as I struggled to find CSPAN on the television to watch as the first woman ever was selected as a major party’s political nominee. I found the roll call to be fascinating, as with each state, we inched closer to this historic moment. After a few moments, my son got off the couch and began playing with his toys. I held my daughter close though, wanting her to watch this moment. But truthfully, she soon started asking how long this “show” would be.

You can read the rest of this article, on the Kveller.com website here.