Don’t Throw Away Your Shot, Shot

If you weren’t at synagogue over the festival of Shavuot, then you missed me rapping the lyrics of Alexander Hamilton, from Lin-Manuel Miranda’s hit musical Hamilton. Hamilton has become so popular that it is impossible to get a ticket. Some of you have been lucky enough to see it on stage. The rest of us are forced to instead listen to it over and over on Spotify, watching the occasional YouTube video of a performance.

Hamilton was the sensation of the Tony’s awards this past weekend. They were nominated for a record 16 Tony’s and walked away with 11 wins. And yet, Miranda got the idea for this groundbreaking musical because at an airport bookstore. He picked up the 2004 biography Alexander Hamilton by Ron Chernow to read while on vacation. That is not a light read. But he said that as he read it, he couldn’t help but realize how the life of Hamilton embodies hip hop. Hamilton was born a penniless orphan in St. Croix, what was then called an illegitimate birth, and become George Washington’s righthand man. He became treasury secretary and “caught beef with every other founding father.”  After all, it is a remarkable story. We would think it is fiction if we didn’t read of it in our history books. 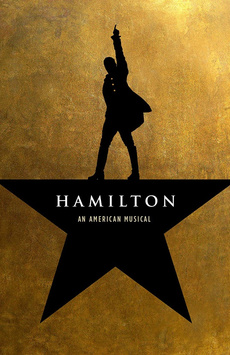 The rabbis offer many interpretations about why we read the book of Ruth on Shavuot.  Many identify Ruth as the first convert to Judaism. Her statement to Naomi of “Wherever you go I will go. Wherever you lodge, I will lodge. Your people will be my people. And your God shall be my God” is identified as an affirmation of faith. Since Shavuot is when we receive the Torah, when we celebration revelation at Sinai, this affirmation of faith is an affirmation of Torah, an affirmation of revelation. Ruth is choosing to stand at the foot of Sinai. Additionally, we read about Ruth on Shavuot, because Shavuot marks the wheat harvest in the land of Israel. In the book of Ruth, Ruth who is hungry, along with her mother-in-law Naomi, is sent out to glean with the other women of Boaz’s field. So much of the book focuses on her cleaning of the wheat and barley, and this is the holiday of the wheat harvest. That is certainly appropriate.

But the book of Ruth is about something greater, something deeper. This book is Tony Award worthy.

Ruth marries into Naomi’s family, a Moabite woman marrying an outsider, only to have her father-in-law die, quickly followed by the deaths of her husband and brother-in-law. As much as her mother-in-law tries to get her to leave, she stays. She promises to remain with Naomi. They travel to Bethelem and are poor, homeless, and hungry, so she is forced to glean the fields. She comes across Boaz and She waits for him to have his fill – to eat a lot and drink a lot – and then ends up seducing him. Eventually, they marry. The end of the book though, having nothing to do with the narrative itself, is key:

The book of Ruth ends declaring that this outsider who experienced nothing but death, who followed her mother-in-law to an unknown place, who was poor and homeless, who slept around in order to find favor and get food, is the great grandmother of David. Ruth is the great grandmother of the great King of Israel, and as tradition teaches, is responsible for the lineage of the Messiah. Essentially, despite all that she had been through, her actions will lead to messianic redemption.

The book of Ruth teaches us despite the challenges of one’s life, anything is possible. No matter the bumps one experiences in the road, you have great influence and the ability to impact and change society and the world – just as Ruth did for Jewish history and Hamilton did for American history. We are inspired by each that despite the tragedies of the past, the world will know your name.

May we find comfort and inspiration knowing that regardless of whatever challenges we face, there is still so much opportunity to change the world.