$15 and the Half-Shekel: Lessons from the Torah on a Living Wage

Last week, at the urging of Faith in New Jersey (@FaithinNJ), a faith-based social justice organization (formerly known as PICO-NJ), I – along with other Essex County clergy – was asked to attend Newark Mayor Ras Baraka’s press conference at Newark City Hall. As clergy, we stood beside Mayor Baraka and members of 32BJ SEIU as the Mayor declared his support for raising the minimum wage for Port Authority employees to $15 an hour. These employees include those who work at Newark Liberty International Airport, an airport that all in our area – and most throughout the state of Jersey – frequent for air travel. The airport is owned by the city of Newark, but leased to the Port Authority. Since the city owns the land, and the airport is the largest employer in the city of Newark – and likely the entire state – the airport, and the way its employees are treated are representative of the values of Newark and the entire state of New Jersey.

The Mayor was asked what mathematical formula he used to come up with the number $15. He smiled and responded “the formula we used was the formula of justice.” He added:

No airport worker that works full-time should have to live in poverty and be forced to make the choice between housing, food and health care. I think we need $15 immediately. 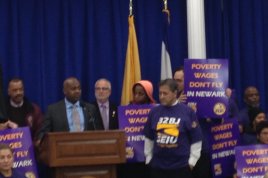 This past Shabbat, we read a special Torah reading as part of the special Shabbat, Shabbat Shekalim. In this Torah reading, we are told:

This is what everyone who is entered in the records shall pay: a half-shekel by the sanctuary weight… (Ex. 30:13)

The Torah commands that each pay a half-shekel as part of a census. Most read the text and conclude that this census was to see how many able-bodied adult males there were to fight, as the Israelites were preparing for the inevitable battles when they entered the Promised Land. However, the half-shekel had even greater significance. The half-shekel was not too much money. It was enough so that everyone could participate. It was an example of everyone being on equal footing, and having the same chance, the same equal opportunity. Obviously the half-shekel meant less to the wealthy than others. Still, it was a symbol of equal opportunity and an equal chance.

We live in a society that is not living up to the promise of this biblical society, in which all are seen as equals and all are given an equal opportunity. No one donated a half-shekel and cried poverty. All were seen as equals. So too, no one should work a forty-hour a week job and not be able to provide food on the table or a home to live in.

I proudly stood with other clergy as Mayor Baraka made his statements in support of increasing the minimum wage to $15/hour. I did so not just as a resident of Essex County. I did so as a person of faith. We must fulfill the biblical promise of this census. We must ensure that all have equal opportunity to succeed in society. That begins with the fight for $15. That begins with the promise to pay individuals a living wage.